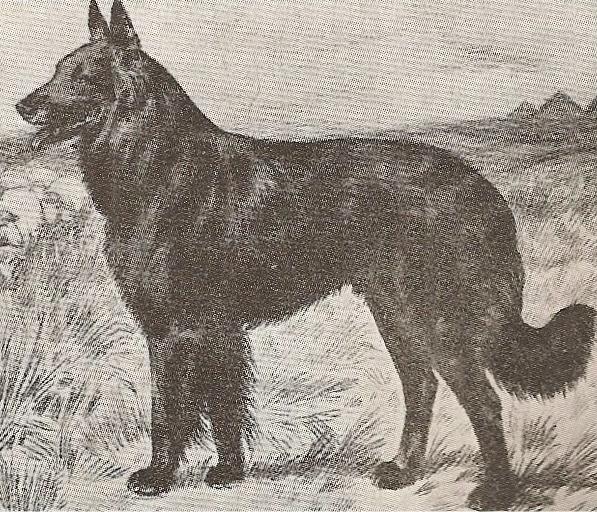 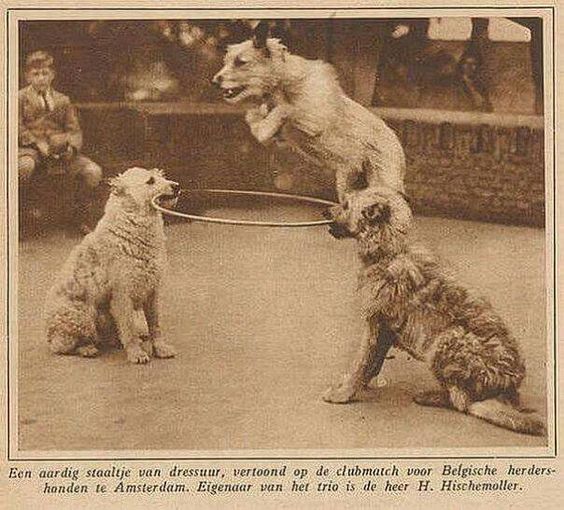 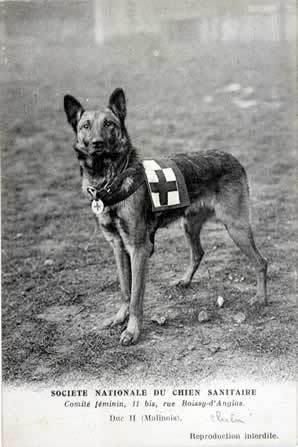 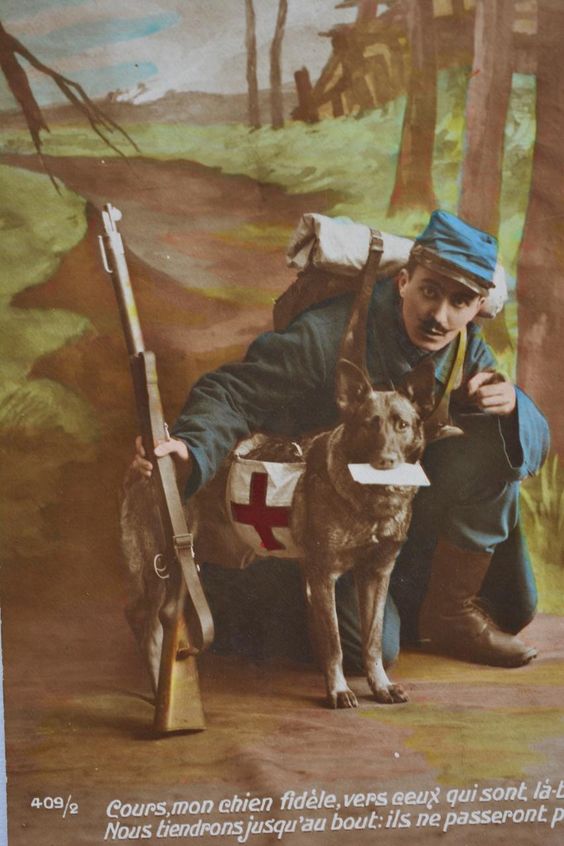 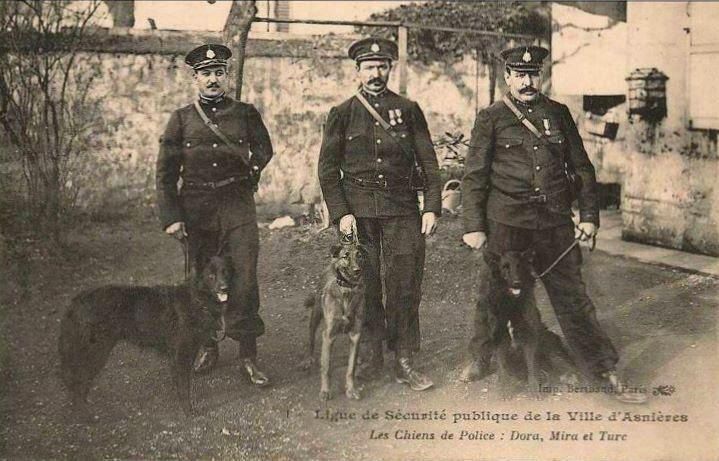 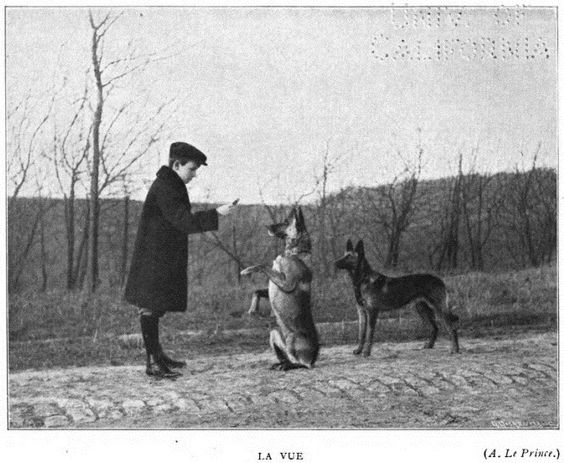 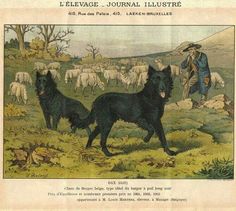 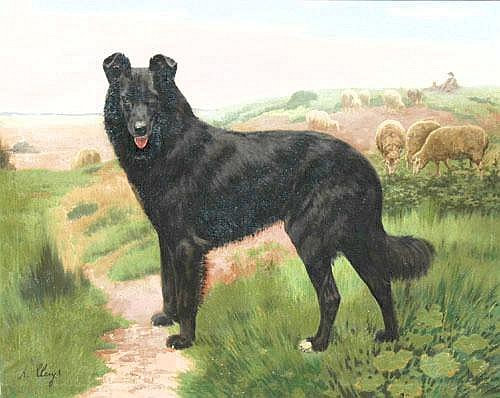 I hope from this description and the accompanying photographs you will have gained an insight into the Belgian Shepherd, both in appearance and character. I will now delve a little deeper into the breed's history and development.

Up to 1891 the Belgian Shepherd Dog was a working dog for farmers and, in 1895, Professor Reul began to investigate a breed standard to ensure a uniform type of shepherd was identified and subsequently bred.

The variety "long haired other than black" was for a long time treated as a poor relation to the Groenendael that was, undoubtedly at the time, quantitatively and, arguably, qualitatively, superior to the other varieties. However the Tervueren made great gains. This was in no small part, due to the efforts of a breeder in the town of Tervueren, who continued to breed these fawn-coloured dogs, until they gained their just recognition, and were called Tervueren. The fawn foundation bitch of Mr Carbeels called 'Miss' was mated to the well-known black stud dog Duc du Groenendael. She produced, as has already been mentioned, 'Milsart'. Long-haired fawn dogs (Tervueren) were also bred to short-haired fawn dogs (Malinois) and frequently both varieties appeared in one litter, short and long hair.
​
The short-haired Malinois is connected with the town of Malines. The Malinois was the variety most  widely known in Belgium and was, and still is, regarded as the prototype of the B.S.D. due to frequent inter-variety breeding.

However, the Laekenois never gained great popularity and did not play an important part in the development of the Belgian Shepherd Dog The wire-haired Laekenois (ash-grey or fawn) was more  or less confined to the Flemish region of Antwerp.

Breeders on the Continent have long realized the importance of inter-variety breeding for the continued progress of the breed. It is worthwhile noting that majority of the really important dogs and bitches within the breeds history have stemmed, either directly or indirectly, from inter-variety breeding. Experienced breeders always acknowledging this must be done with care and to be a benefit over the long term, rather than just being an instant fix.

In the UK, since 1980, owing to the importation of several quality Tervuerens from the Continent, breeders have been given the opportunity to improve their Groenendael stock by introducing Tervueren bloodlines. There has been a dramatic improvement in Groenendaels; this being illustrated by the fact that many Groenendael champions in the UK stem from Groenendael x Tervueren breeding, including the breed record holder, Ch Zodiac of Questenberg at Jalus. This improvement would not have been possible but for inter-variety breeding.
To quote breed expert and author of "Blueprint of the Belgian Shepherd Dog", Dr Pollet, of Belgium: "Although the coats differentiate the varieties, it is well known that the danger exists that the four varieties evaluate the ones in relation to the others in a too divergent way. It would be a very bad thing for the Belgian Shepherd if the four varieties had already evaluated so much that there would be in reality four types and that going back to a unique type would not be possible any more."

THE BELGIAN SHEPHERD IN THE UK

THE BLACK LONGCOAT - THE GROENENDAEL

I will give a very brief history of the Belgian Shepherd in the UK. The first attempt to establish the BSD in Great Britain was interrupted by World War II, when some Groenendaels were imported from France. Sadly, all traces of these dogs were later on lost A second attempt to establish the breed in GB was made in 1959 by Eric Irving and a group of enthusiasts. It was decided to import the black long-haired Groenendael rather than the red long-haired Tervueren to avoid confusion with the long-haired German Shepherd Dog 'Indo' and 'Inkasa des Forges Monceux' were the first Groenendaels to arrive from Belgium, followed by 'Kaline des Chimeras' and 'Mowgii de la Baraque de Planches', and, from France, 'Okay du Val d'orge'.
From 1964 onwards three more bitches were imported from the well known Belgian kennel Baraque de Planches. The most significant was 'Peggy de ]a Baraque de Pianches' who was in whelp to 'Polar Star de la Baraque de Planches' when she arrived in quarantine. She whelped two dog puppies, 'Ouamille' and'Quentin'. in 1971 Ouentin became the first British Champion and for a long time was the breed record holder. In 1966 two further Groenendaels arrived from Belgium from the Baraque de Planches kennel. The first Groenendael from America arrived in 1972 when Am Ch 'Larelee's Traveler' was imported. He mated only a few bitches, but passed on size and substance and improved temperament His influence is still apparent in subsequent generations.
During the next years British breeders and judges aimed to achieve dogs of good construction and movement This they achieved. It was in 1975 when Mme Aubry, breed specialist from France, warned British breeders to pay more attention to breed type. Thus new imports from the Continent were arranged. In 1979 'Dax de la Pouroffe' and 'Elfe' from Belgium. Since then, there have been many more imports, many of whom have made their mark on the breeds history, ones which spring to mind as having an important part to play are Ch Ezau du Pay des Flandres, from Belgium and Vainqueur Ixion de Loup Noir at Valson from USA,  more recently Ch Magician van de Hoge Laer and  Ch Gooitzen and Ch Gydo v’t Belgisch Schoon.  The Tervueren is inexorably linked with the progress of the Groenendael, and Tervueren imports have undoubtedly made their mark on the Groenendael.  Drack de la Pouroffe sired two top winning Groenendael in Ch Zhale Phillanderer and Ch Zellik Whirlwind. More recently forward thinking Groenendael breeders have made use of Ch Lance van de Hoge Laer at Corsini, with his excellent Groenendael lines, and he has produced the Champion sisters Ch Tanje Starlight Sensation and Tanje Starlight Silhouette of Xelbi.   A new wave of imports have followed and now breeders are able to take their females across to the continent to mate to the top dogs in France, Belgium and Holland , I expect to see huge leaps in breeding programmes and an improvement in the type.

THE RED OR GREY LONGCOAT - THE TERVUEREN

The Tervueren is a comparatively recent arrival in Great Britain being imported from France in 1971, since then it has benefited from numerous imports, and their influence has raised the quality of this glamorous variety, to its present high standards. The first two imports, 'Ungo' and 'Ula du Clos St Jacques' although being red themselves, produced the first grey litter in the UK, of which one, the female Zellik Alexandra, went on to win a CACIB in Belgium. Another, the male Zellik Alexis, made his reputation as a show and working dog.
In the same year a Tervueren from America was imported, 'Uranus de Braise Rouge', to be followed by the bitch 'Am Ch Quadi du Petit Chalet' who was in whelp to 'Am Ch Chateaubriand'; she produced six puppies in quarantine.

In 1975, a further bitch was brought in from France, 'Vanda' and, from America, 'Colombe O'Albions Franglad'. It is important to recognise that the early development of the Tervueren in Britain was greatly dominated by American imports.  This type markedly differed from the Continental-type as imported from and prevalent in France and Belgium. Stock from American lines was generally early maturing, heavy dogs of great size and substance, lacking overall elegance and deficient in head type, these traits were difficult to breed out, and can still be seen in some lines to day. Nevertheless these lines played an important part in furthering the acceptability of the Tervueren in those early days.

The turning point came in 1978 when a number of Tervuerens were imported from the two Belgian kennels 'De La Pouroffe' and 'of the Two'. Boris of the Two' mated three bitches in the UK before he went on to Scandinavia. 'Bandol de la Pouroffe' mated a number of bitches, predominantly of American breeding. He proved to be a very dominant stud-dog. Some of his offspring became very well known winners.

During 1979-1983 more imports came from Belgium which were to have a great impact. The bitches 'Claudette of the Two', 'Dancing Dolly of the Two' and 'Dundee of the Two' were followed by 'Zarina von Svitto' from Switzerland and, from France, two greys, brother and sister, 'Reiane' and 'Rebec des Iroquois'.

Then came two additional imports from Belgium, 'Drack de la Pouroffe' and 'Fanfare of the Two'. Both these dogs have made an impact, producing quality stock, greatly improving type and coat. Fanfare was to combine to great effect with the lines from Bandol and this combination is behind many of today’s winning stock.
More recent imports Ch Ninja, Ch Lance and Ch Opium Van de Hoge Laer at Corsini, coupled with several quarantine born litters to  Ch Cashmire de la Clairiere aux Louves, and Ch Giono du Bois du Tot, and Ch Emir de Condivicnum, have made a big impact on the quality and type of the Tervueren in this country. These dogs have combined well with the existing lines and breeders have managed to inject type and quality, bringing  a spectacular improvement in British bred Tervueren.

With many more imports from France, Belgium and Holland the overall quality of the Tervueren is  improving and the best of our current stock compares favourably those winning in France Belgium and Holland. There of course is now the opportunity to import without quarantine and to take females across to the best males on the continent and some breeders are fortunate enough to be able to benefit from this.  In fact breeders are now exporting their stock to American, France, Australia, New Zealand, with great success.

The history of the Malinois in Great Britain started in 1972. ‘Venus de la Grange aux Cerfs' from France was the foundation bitch for the Sabrefield kennel, the owners of which later imported the dog 'Vidock du Clos des Ondes' from Belgium. The third import was of the dog and bitch 'Yosie' and 'Ybo van Bouwelhei' from Belgium. In 1978 it was found necessary to import another stud dog, 'Ben du Maugre', again from Belgium, who proved to be a real asset He sired some very nice puppies and stamped his good head and type on the line. With the possibility of inter-variety breeding, a much wider range of bloodlines has become available.

The working Tervueren, 'Delators Grand Soigny of Muskahn' produced a Malinois litter, as did 'Bandol de la Pouroffe' (who himself had a Malinois grandfather), 'Fanfare of the Two', and 'Ch Questenberg Masai'. Their progeny helped widen a limited the gene pool in this country, without the vast expense of quarantine. More  recent imports, Urk des Loup Mutins and Alkan and Adja du Mas des Lavandes plus quarantine litters, from Manon de la Belle Edita, and Quattro van Valderlo have begun to make their mark.

This variety is numerically strong in France, Belgium and Holland, where it regularly meets and beats its long coated cousins. It is also much sought after and recognised for its working ability.  Great Britain has been a little slow to catch on to this shortcoat variety which although has not the glamour of the long-coats, has a great deal of appeal as an agile worker and devoted loyal companion.  The future  of this variety lies in the hands of a handful of devoted enthusiasts who are determined that this versatile worker gets its just recognition.